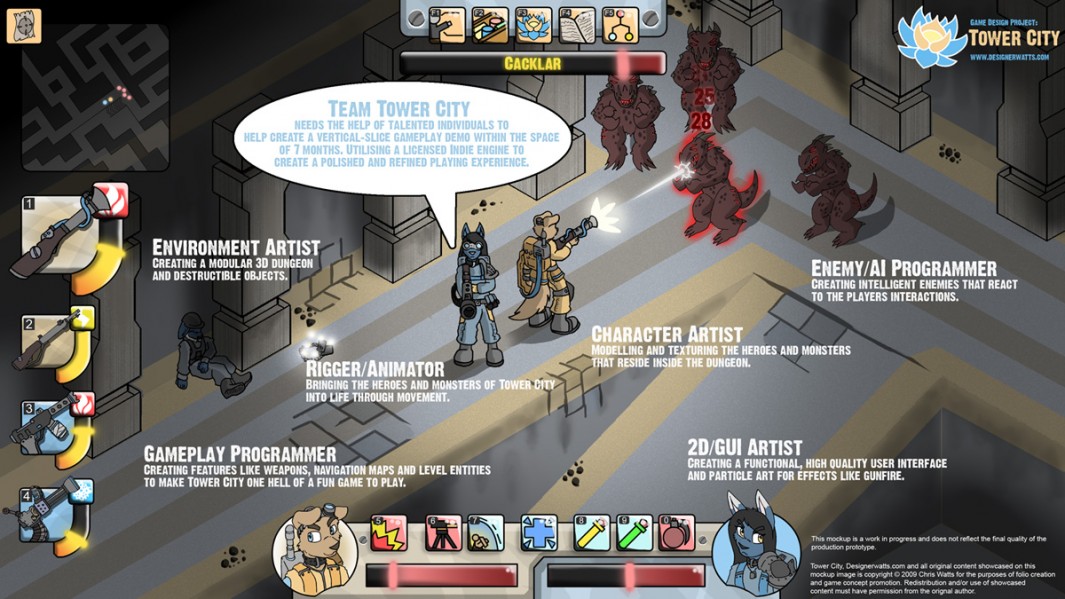 If you don't yet know about the game design project Tower City. Please check
out the following link before proceeding: http://www.tsumea.com/journal/designerwatts/240309/tower-city-video-log…

I present to you kind people a proposal. Seeing just how large and willing the
indie scene is at the moment and with the projects currently in circulation
I would like to put forward a plan for creating a playable prototype alongside
the game design document development for Tower City.
If this proposal doesn’t take off. The design document and video logs
will continue regardless. My aim with this prototype is to not only give prospective
greenlight funders a tangible example of the design proposed. But also provide
the indie community with an interesting project to participate in.
As I’m currently living off saved funds and plan to until my game design
folio is complete my dedication to Tower City is more then full time. Spending
up to 45 hours a week working on design documentation and video log presentations.
People interested in this project can rest assured that the designer will be
supporting them 100% of the way.
Please read the small proposal below. And if you’re interested in working
on this project please send me an e-mail at designerwatts@hotmail.com with the
following:

As for people I can put to work right now I need a responsible and dedicated
programmer to become the programming lead. I would get him to start researching
into the game engines. And a 2D concept artist is someone I need to put a real
artists vision into the world of Tower City.

To create a fully refined and working prototype that demonstrates the core
gameplay principles behind the design of Tower City.
The Prototype will represent a “vertical slice”
of the game and fulfill the following features in a playable demonstration:

What is a “vertical slice”?

A vertical slice in the game development industry refers to making a demo that
demonstrates what a fully produced final product of the game would look and play like.
Only it's focused on a small slice of the game, the demos running time being around
5-20 minutes of play. For games of a moderate to large production scale, creating
a polished vertical slice that’s fully playable is one of the best ways
to approach green lighting for a new IP.

With the focus of the prototype being a demonstration of the game play concepts
described in the game design document being created at the same time. Tower
City will use a pre-existing engine that can be scripted and modified to suit
the needs of the project in order to focus programmer efforts towards implementing
gameplay-based features. This engine will be ether be an indie licensing of
Unity 2.5 or TGEA. Chris Watts will initially provide the funding to buy the
indie licenses.
The production of this prototype will go hand in hand with the production of
the game design document. The production plan is broken into time based 3 stages,
which are further broken up into milestones. This outline is as follows:

The pre-production stage of the prototype will be fronted by a lead programmer
and a 2D concept artist.

Once the engine has been decided upon. The project will kick into production.

As we move into the production stage a more detailed outline of what will be
needed will be provided.
If artistic requirements cannot be meet then the prototype will opt to be presented
in a clean gray-box style representation. Coding requirements must be met however.
They cannot be downscaled.

The stage of the prototype will give the developers of the project 2 months
to polish and refine the prototype from all facets. From September onwards no
new code features are to be added and all art assets must have a placeholder
gray-box implemented.

To coincide with the final video log of the game design folio which ends with
presenting a full production plan, the prototype demo will be released along side
it. This will give prospective greenlight funders not only a full game design
document backed up with video logs. But a Vertical Slice Demo that showcases the
game concept as a fun and engaging experience.
This vertical slice prototype is a proposal however and requires the willing
help of other indie talent to make it materialize.

What's the benefit of being on this project?

Even though the focus is on creating only 15 minutes of gameplay, the amount
of time and effort needed to create this prototype is quite large. But with
a focus on showcasing a couple of highly polished features the aim is to wow
and impress people in those 15 minutes. To claim that you worked on a game demo
to that level of quality would shine very kindly upon your folio whether you
coded, modeled or animated.
The focus here is quality over quantity.
Cheers!
Chris Watts