My experience at GCAP! - [ And play our Mole CGAP submission.] 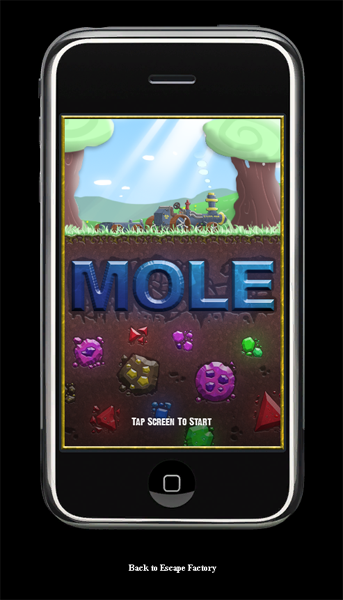 First off I’ll disclaim that as far as my experience at GCAP is concerned I was only a exhibitor. I didn’t attend any of the keynotes or talks. I sat in at the Mole table 90% of the time. The rest was spent talking to people and playing the other indie games.

Play our GCAP submission of Mole!

I noticed was that the event was quite small. Not to many stalls apart from the 9 indie games on display. I have to give props to 2K Australia for putting a stall up there and having so many of their development staff come down. It gave the many students [and myself] some great networking opportunities. Of course I myself handed out my card like a bandit. But I’m a designer for hire. Deal with it. ;)

The 9 indie games on display was a great selection. Each game was very different and unique in its own way. Some were more polished then others but I could understand why each game was a finalist.

I’ll give my own thoughts on each game:

Blackely Van de Buckle’s Brass Cabaret: Game name is far to long! But the game itself was interesting. I think some design choices didn’t make total sense. But there is a solid platforming concept there.

Last Life: An interesting take on exploration and tower defense. Although lack of tutorials and overview map meant the designer needed to explain the objective of the game to me.

Bunni: A browser-based game I feel was inspired by animal crossing. Solid design concept and art. But hard to get you’re head around when starting.

Hazard: The Journey of Life: An interesting FPS puzzles game with a unique gameplay hook and graphic style. But much like Last Life it was hard to understand at first. Designer basically played the game for me. :/

HPlus TD: A multiplayer turret defense game. An interesting concept that I think has great potential. However the game needed more art and gameplay polish for GCAP to make the impact the other games made.

Mole: Our game. In comparison to the other games on display Mole is actually a vanilla game concept. But I think we sported a lot of polish and a complete, easy to play game. If there was an award for commercial viability I think Mole would of taken it.

Pillager: Sporting a graphic shader to make the game look like a painting. It looked great. But the gameplay was standard fare. Controls and combat design are a bit stiff as well

WordCore: A “guess the word” mastermind game. A well polished and a solid web-browser puzzler. I could see it making money on a platform like Facebook.

As for my opinions on the winners, and I emphasize the word “my opinion” here.

I think it was going to be a toss up between pillager and Axis Mundi. Pillager had its excellent shader going for it. Axis had presentation, solid GUI and game-industry quality artwork.

Personally I was siding towards Axis Mundi. Because I get the intension that the artists behind the game have an understanding of making good game art. Pillager looked great. But the design and style behind the buildings and characters went as strong as Axis intentional and consistent stylization.

I’m a bit on the unsure side with this award. Going for last life was a working and understandable gameplay mechanic that encouraged quick thinking and exploration.

But as I said above. The game was lacking some principal courtesies to the player like tutorials; hints and an overview map which would of helped greatly. If a designer needs to explain core gameplay elements to the user then there may we a problem.

Each game this year was so different in gameplay to each other. So this award could of really gone to a number of games. I think it was Last lifes concept that earned its reward. I havn’t played a game like it and that’s an impressive feat for the designer.

I knew from the moment I played this game that it was going to win.

As silly as this will read. It was simply the most “Indie” of the indie games at the event. It was different and sported a unique gameplay design. It has a minimalist art style and incorporates somewhat loose philosophy in its gameplay and structure.

To be fair though. The dude had worked on and off on this game for around 3 years. So if only by sheer time and effort the dude deserved to win it.

My only complaint is that as it’s stands, player control are a bit sketchy. The game is also very niche in appeal. But I wish the best for the designers’ success as he plans to release it on steam.

Overall I felt that if there was a theme going for the gameplay and best game award. It was that the judges liked the games that tired to express the most unique and creative gameplay concepts. These games didn’t need to be polished or even finished. But they were fun and designed well.

I think Mole didn’t win any awards because our goal was one of both presenting a finished, polished product and a commercially viable game rather then any sort of unique style or gimmick. I think that money-orientated focus probably annoyed 1 or 2 of the judges. Who by my guess want games to be about more then just making money. Nonetheless I felt that Mole was judged very fairly.

As for how Mole went down at the ones who sat down and played it. We couldn’t of asked for a better response!

People sat down at our game and played for anywhere on average of 10-20minutes. Considering this is an iPhone game I think that’s fantastic. Everybody who plated the game got concept behind Mole and how to play it. They would play for multiple digs and some even came back to play more then once.

It was great to get advice from some of the senior designers of studios like Firemint and 2K. Advice and critique we intend to take on board for one last polish pass before we submit Mole to the iPhone store. That alone is worth more then any award we could of gotten.

Overall I think attending and presenting Mole at GCAP has allowed us to get some fantastic feedback and make our game even more polished and fun to play.

It was totally worth our hard efforts.

Play our GCAP submission of Mole!

Some comments about Hazard

Was nice to meet you at the event, and I wish you all the best with your game. From what I played, it was fun and seemed to be a definite fit for the iPhone market, though I said that at the event as well.

Just thought I'd point out a couple of quick things about what you said about Hazard. Your concerns about the game are purely because an exhibition is not the best time to try and learn how the entire game works, hence why I jumped in to play the game and show things off. I did that with many people. Showing off what makes the game unique, and then letting them mess around some more. The controls seemed unintuitive because I threw you straight into the end game, where you didn't have time to learn how things worked progressively. The other comment about niche appeal is yet to be seen, but from competitions and conferences, I'm not really concerned about that one. A whole lot of people are finding it really interesting.

Thanks for posting your thoughts on the event. Your assessments of everything seem quite fair.