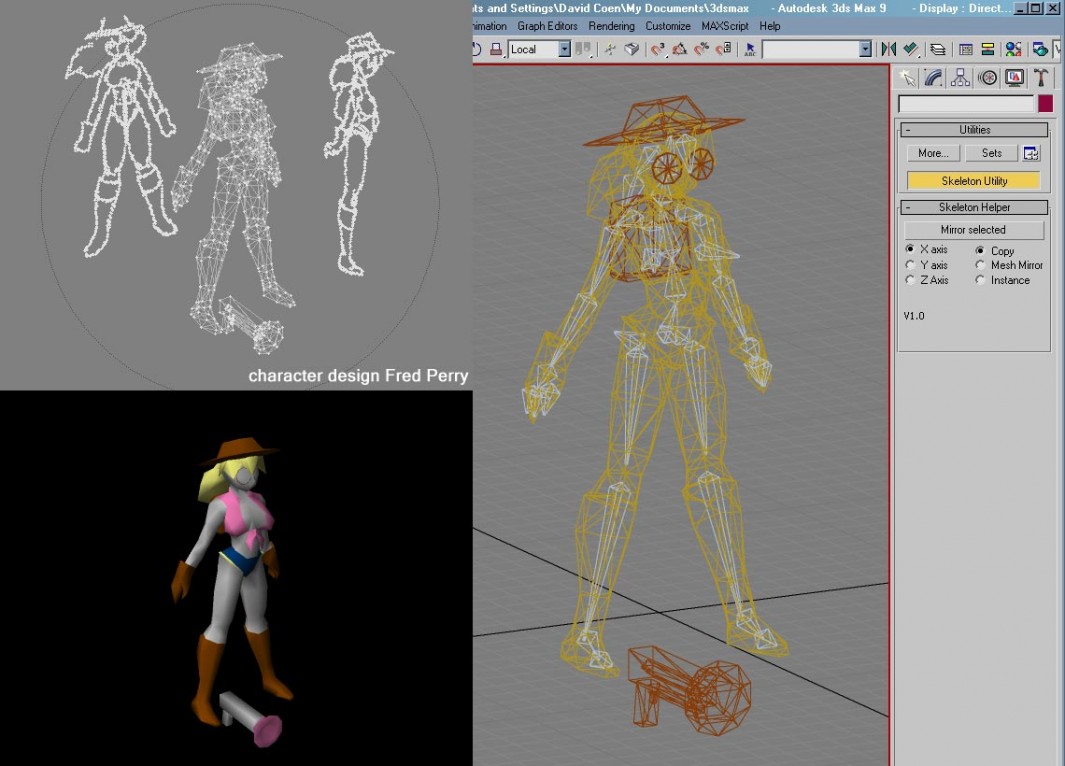 One day to make the model
(lightwave, drew a front and side profile of a Fred Perry character, 'Gina', from his comic 'Gold Digger', it is rather sexist, but also a lot of fun. converted the tga into a point cloud to have in the modelling space while making the model)

this is to make a softbody character test with (each vertex to have different spring constraints applied after skinning) so wanted something relativly low poly (760 tri for the figure, 382 vertex) almost another 300 triangles for the hat, glasses, backpack& gun, but they will not be softbodies.

rather than use biped like usual, i made a custom skelton, and rather than get annoyed with recreating a mirror of each of the 'handed' bones, (and rather than look up a max script and pray someone else had writen a good one) took another day to write a max pluging to mirror the skeleton. (actually, took 4 hours to set up the plugin, the gui, make a mirror of the hierarchy, then a day to track down a max memory leak on attaching a child node to a node with the 'i am a bone' flag set plus other mucking around to get the bones made in code to behavour like bones. max does some amazing things, but the most amazing thing is that it even works, code and concepts are a bit of a mess.

Could you not have just used

Could you not have just used the mirror function in animation>bone tools? Or is there something in that that doesn't work for what you need?

thanks for the comments, last

thanks for the comments, last time i looked at max's inbuilt bone mirror it was swapping the determinant (applying a negative scale)
Programmers sometimes choose the solution that is most technically interesting, the one they will learn the most from, rather than the quickest/ easiest solution.
So yeah, i felt pretty stupid when gushing to an animator at work what i had done and they just clicked a button to effect a similar result.